Perched high above the cliffs north of La Jolla, The Lodge at Torrey Pines offers unpretentious elegance in a breathtakingly beautiful natural setting. This is home to A.R. Valentien, one of the San Diego area’s most refined restaurants. Overlooking Torrey Pines Golf Course, with the Pacific Ocean on the horizon, The Lodge’s early 20th century architectural style epitomizes the distinctive southern California Craftsman era.

The restaurant is named for the early 20th century California impressionist landscape painter and examples of his work are displayed throughout The Lodge. Massive wooden beams and a crackling fireplace add charm to the rustic elegance of the interior. Plush velour booths, white-draped tables accented with fresh flowers and magnificent views over the green expanse of the golf course make a regal, but welcoming dining venue.

Acclaimed Executive Chef Jeff Jackson is at the epicenter of the kitchen’s success.  French-trained in the classical manner, he is credited with launching San Diego’s buy local, buy fresh, farm-to-table movement.  His signature cuisine has won numerous accolades, including being heralded as one of the Top 10 Farm-To-Table Restaurants in the Nation by Conde Nast’s Epicurious.com.

Chef Jackson’s influence on San Diego’s culinary culture reaches well beyond the walls of the Lodge at Torrey Pines. He founded the annual autumn “Celebrate the Craft” cooking festival, currently in its twelfth year. 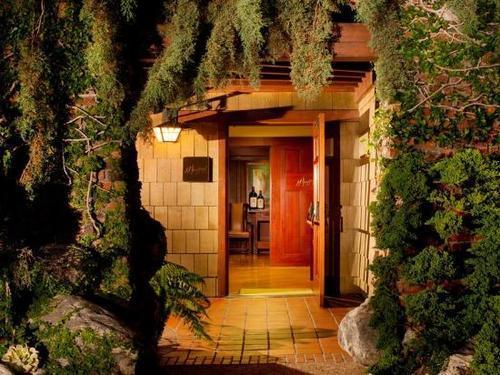 “When dealing with the best, I see no reason to mask or alter any of the intrinsic qualities. This way each ingredient fully contributes to the composition of the dish,” Jackson explains.

From the beginning, Jackson has sourced his ingredients from local fishermen, specialty food purveyors, and the many independent small farms and orchards in and around San Diego, including Suzie’s Farm, Griffin Farm and El Campito. The region’s year-round growing season allows Jackson to build his entire, ever-changing menu on just-picked produce.

This season’s appetizers include:

This month’s standout entrées are:

ELM sat down with Chef Jackson for an insider interview about what makes A.R. Valentien one of the “Top 10 Farm-To-Table Restaurants in the Nation.”

ELM: You were trained under legendary culinary expert Jean LaFont, can you tell us what that was like?  What was the most influential thing he taught you?

CJ: It was my first experience working in a truly professional European kitchen. I grew up in Oklahoma and worked in restaurants through high school, and I had no idea how a real kitchen worked. I believe the most important lessons learned at this stop on my journey were a strong introduction to French cuisine, organization and consistency.

ELM: Who else has influenced you in your culinary career?

CJ: Jean Banchet at Le François outside of Chicago was my Master’s degree in my culinary training. This was an environment that was completely serious 12 hours a day. At the time, Le François was considered the best restaurant in the United States. We worked with the best ingredients and executed dishes to perfection. Mistakes were not tolerated. The two years I spent with Chef Banchet taught me what true passion is.

ELM: How did you come to decide to leave Shutters on the Beach in Santa Monica and become Executive Chef for A.R. Valentien?

CJ: I had been at Shutters for ten years, the last two in the position of Director of Food and Beverage. A client at Shutters who was involved in the opening marketing for the Lodge actually introduced me to the project. It became obvious that we were coming from the same place, philosophically. It was an opportunity to build something new from scratch, which I really enjoy doing. I never realized how much I depended on the creative process until I tried my hand in this new position. After about a year I knew I belonged in the kitchen.

ELM: Your menu is constantly evolving. Reflecting produce available at the peak of season from local farms, orchards and fisherman here in southern California. How do you interact with these individuals to ensure the quality of your ingredients?

ELM:What are some of the pros and cons of working with local farmers?

CJ: I don’t believe there are any cons. We change our menu daily and can utilize whatever is available and at its peak. It requires a passionate staff and a little extra effort but it’s well worth it.

ELM: A.R. Valentine has been named one of the top ten farm-to-table restaurants in the nation. What is your farm-to-table signature dish? Can you describe it from a chef’s perspective?

CJ: There really isn’t a signature dish; more of a signature style. We choose to keep things relatively simple and let the foodstuffs speak for themselves.

ELM: The holiday season is upon us. Is A.R. Valentien doing anything special for the holidays this year?

CJ:A.R. Valentien is located at The Lodge at Torrey Pines, a AAA 5-diamond resort. The hotel is decorated beautifully with multiple fireplaces and a 17-foot tall Christmas tree in the lobby. In addition to the festive holiday ambiance, we offer a special holiday menu.

ELM: What do you want ELM members to know about A.R. Valentien? What sets you apart from other fine dining restaurants here in San Diego?

CJ:At A.R. Valentien, we take advantage of the best that California has to offer: a magnificent setting, superior produce, indigenous Craftsman-style architecture and the rich history of California Impressionism.

ELM thanks Executive Chef Jeff Jackson for providing his own insider information about A.R. Valentien.  We look forward to helping our clients experience all that A.R. Valentien has to offer.